What is the best martial art for kids? | House of Martial Arts

What is the best martial art for kids? 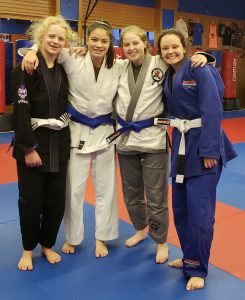 Whether drawn to the martial arts for self-defense so they can protect themselves against bullies or because they’ve seen Jackie Chan and Bruce Lee up on the big screen, kids want to learn karate. It is just that simple. But kids use karate as a catch-all term for all martial arts.

For parents in central Indiana, the choice isn’t so easy. There are a lot of good choices. Knowing what your kid wants and needs in terms of martial arts can be daunting. There are endless schools in Carmel with all kinds of strange names that teach different styles and have different priorities. And in some situations, the pricing packages can be quite formidable, locking your child and your wallet into a long-term commitment before you even know if the school and system is right for you. So, what do parents need to know when thinking about signing their kids up to martial arts?

Begin with these questions:

Let’s face it, a child isn’t going to learn adult self-defense, but they can be introduced to important self-defense concepts like maintaining safe spacing, good footwork, and sound hands-up defense. Similarly, an impatient seven-year-old probably won’t find enjoyment sitting instances for long periods of time just like a kid who likes to punch and kick won’t find the tactical, ground-based grappling of Brazilian jiu-jitsu to his or her liking.

But how do parents line up their kids needs with the myriad martial arts available in most areas?

In general, all martial arts can be divided into one of three categories: traditional, striking, and grappling. There is some overlap, but a student in a forms class is not going to receive the same grappling instruction as a student in wrestling or BJJ. Forms classes like Tae Kwon Do, Karate, and Kenpo teach fighting concepts. They teach self-esteem, fitness, and discipline. Brazilian jiu-jitsu, wrestling, boxing, and mixed-martial arts teach kids how to fight. 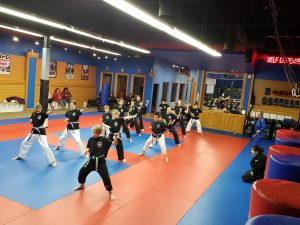 Striking: Boxing, Muay Thai, Krav Maga. These are the striking arts. Besides muscle strength and footwork, they emphasize punches, kicks, and elbows. They tend to be high impact. Through real sparring, they develop a unique type of confidence. 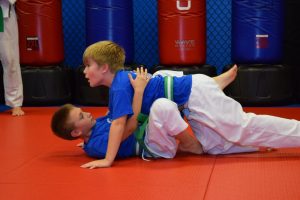 Grappling: Brazilian Jiu-Jitsu and Wrestling: Grappling teaches amazing body awareness, flexibility, and grit. They teach ground control, position, and submissions. Submissions are chokes and locks that require an opponent to “submit” with a tap. Like the striking arts, grappling builds a special type of confidence because it teaches kids to take a strike or fall while still being safe.

Mixed Martial Arts and Sambo: These martial arts combine striking and grappling. Kids don’t tend to start here but graduate to these types of classes if they show a desire and aptitude for fighting. 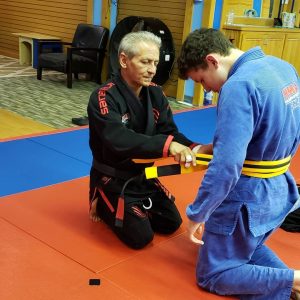 The school and the Sensei matter.

It is worth driving further for the right teacher and dojo. After all, you are selecting a mentor for your child because that is what a sensei is. There are many types of black belts but very few sensei. Look into their background: Who gave them their black belt? Do they have multiple black belts in multiple martial arts? Having multiple black belts in various disciplines demonstrates the sensei view themselves as a student still. Does the sensei actually teach the class? Go to the school. Watch a class. Look at the older students versus the younger students. Is there noticeable growth? Are the students listening? Are they having fun?

Be wary of annual or multi-year contracts and extra costs.

Until you’re sure your child will enjoy and stick with it, don’t commit too much money up front. If the school is only pushing long-term contracts, be wary. Always ask how to cancel. Additionally, ask upfront what the school charges for testing and belts and mandatory events like tournaments. You might be surprised at how quickly some martial arts add up the costs.

With all that said, martial arts shouldn’t be cheap. They are teaching your child important life skills like respect, self-confidence, and discipline in addition to the fitness and ability to defend oneself. Expect to pay but make sure the cost is worth the instruction.

Enroll your child into a martial art that will help them grow and they will enjoy.

Here at the House of Martial Arts, we practice traditional martial arts, kickboxing, and Brazilian Jiu-Jitsu. All our instructors have multiple black belts in different martial arts and take pride in our kids’ classes. Sign up for a free trial today!